WE WELCOME YOU TO THE 2nd CARNIVOROUS TOUR! 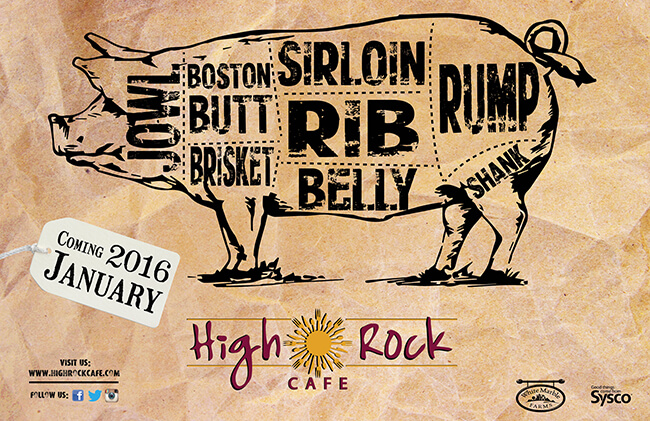 The Carnivorous tour is back and starting January 6th at the High Rock Café: a tour of pork exploring eight different cuts, over an eight week period. With the success of last year’s tour featuring beef, Chef Justin Draper is excited to tour the pig.

Pork is the most commonly consumed meat worldwide and pigs have long been a symbol of prosperity and gluttony, it is why we say someone is “being a pig” when they take more than their share. Some cultures believe that on New Years, the bigger the pig the fatter your wallet will be in the coming year! So the fatter the pig, the fatter your wallet.

For the next eight weeks the High Rock kitchen will focus on a section of pork and create three unique dishes each week. The goal of this endeavor is to inform the clientele about the wide variety of flavors and cuts that are available to them. “There are so many different cuts of pork and so many ways to prepare it, we are excited to share that with our customers and give them something new each week.”

As a way to make this epicurean adventure fun, the High Rock will be offering prizes to those who attend the Carnivorous tour. A punch card will be available that briefly outlines the beginning and ending of each week and the cut of meat highlighted with three sets of prizes for making it to either 3,6 or all 8 weeks. NEW MENUS WILL BE RELEASED EVERY WEDNESDAY MORNING FOR THE NEXT 8 WEEKS! See our menu here.

The Carnivorous Tour starts January 6th and ends March 2nd. The regular lunch and dinner menu will still be available but the Season’s Freshest Menu will be taken over with Carnivorous Tour fare. A tour in pork might seem to favor only one type of clientele but in classic High Rock style the three creations will appeal to all foodies. The pricing as well, is meant to reach to all customers, it’s quite possible to attend all eight weeks for around $100. So if you or anyone you know enjoys cooking or creative cuisine, head over to High Rock this winter, we look forward to taking you on this delicious journey that is sure to delight any carnivore.

Special promotions and upcoming events. Be the first to know!